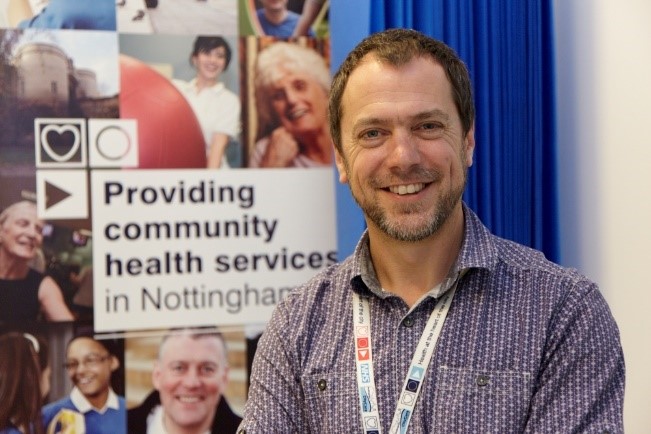 NIHR CLAHRC East Midlands researcher Rob Goodwin is in line for a leading NIHR accolade for his work in evaluating physiotherapy as a first point of contact service for people with musculoskeletal complaints.

Rob has been selected as a finalist for the Allied Health Professions Research Impact award.

The winner will be announced at the Chief Allied Health Professions Officer’s (CAHPO) Awards 2019 on Wednesday, 17 July at The Royal Society in London.

Speaking about the study, Rob said: “The 12-month pilot scheme was the first step in my personal research journey and I am pleased to see the impact it has had nationally. I am committed to researching the area and further contributing to deepening the understanding of implementing such transformative initiatives.”

For the last three years Rob has been furthering his early work by deepening the understanding around the implementation of first point of contact physiotherapy (FPCP) through his PhD studies.

Rob’s research employed realist methodologies; both realist review and realist evaluation. This resulted in a number of refined theories which were themselves tested by conducting individual interviews and focus groups with stakeholder members that included physiotherapists, GPs, commissioners, administration staff and patients.

Key findings included six key implementation lessons, generated from the results, were presented that inform future service development. In summary, despite evidence of clinical efficacy, patient and GP satisfaction, FPCP has not been implemented with sufficient capacity to result in a noticeable impact. This research synthesised a number of implementation guidelines.

The work in Nottingham has contributed significantly to the national agenda, influencing the recent NHS England commitment to an additional 20,000 non-doctor clinical staff in general practice, including first point of contact physiotherapists.

In January 2019, NHS Chief Executive, Simon Stevens, highlighted the scheme as an example of ways to increase capacity in primary care and reduce the burdens on general practitioners.

He said: “We want more GP appointments because we are going to have more GPs, but as well as that we want patients to be able to directly see a physiotherapist or a pharmacist rather than having to go through a GP in the first place.”

Dr Emma Rowley, Capacity Development Lead at CLAHRC EM, said: “Rob’s PhD is a perfect example of how research can make a positive impact to improve frontline healthcare. We are pleased that his achievements have received national recognition and we wish him all the best”.