Venture into the unknown pays off for determined nurse 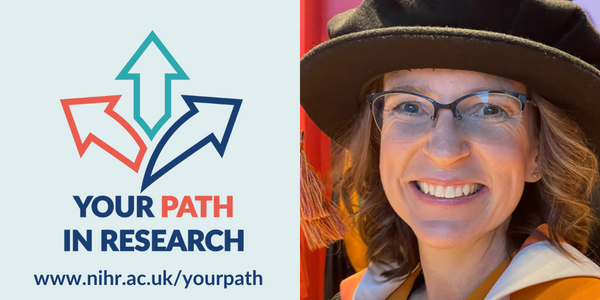 Rachael Carroll didn’t realise it at the time, but while working as a mental health nurse she was perfecting skills which would help her to go on to flourish in her new career as a researcher.

Tasked with getting as many questionnaires completed each day from older people across eight hospital ward as part of a study, Rachael was struggling. “Can I have a few minutes of your time,” was just not working, leading to knock back after knock back. She soon realised a change of tactics was required, so called on her experiences working in mental health for 26 years.

Rachael said: “I think that when you are working as a mental health nurse, you are telling people things they don’t want to hear such as, ‘we’re going to section you,’ ‘you can’t go home,’ ‘I would like you to come to hospital with me,’ ‘I would like you to take these medications’ or even ‘tell me your story’, ‘tell me how you are feeling’. With all of those sorts of things, you have to engage with people.

“I’d be asked to go onto the wards and get questionnaires completed by people over 65 by asking about their care experience. I’d have the questionnaire in my hand and I learned how to phrase it. I noticed that if I said: ‘can I have a few minutes of your time,’ these older people would say ‘no, no thank you, go and ask somebody else’.

“I thought there is something about that phrase – they are saying ‘no’ before I’ve even explained, so I had to turn it around and start to talk about the study and engage somebody before I’d say ‘I’m going to ask you a few questions’.”

It worked and Rachael met her targets, thriving at data collection thanks to her excellent engagement skills.

Having always valued research while working as a nurse, Rachael had never considered it as a career choice. But then after completing a demanding nine months in a role as a ward matron, she went on the hunt for a fresh challenge.

Inspired by a few previous one-off lecturing roles and with a Master’s degree already on her CV, a chance search for positions on the De Montfort University website led to a change in direction.

She got a job as a Research Fellow with the opportunity of doing a PhD working on a study led by Professor Jayne Brown, who would soon become a pivotal influence on her.

She said: “When I applied for the post there was a suggestion in the job advert that there would be an opportunity to do a PhD. I didn’t really understand what it meant, it was my previous manager who had put me on the master’s course who said, ‘Rachael, this is a really big deal, this is your opportunity to do your PhD.

“So, when I found a possible research gap, I went to meet with my supervisors Professor Jayne Brown and Professor Mike Nolan. He said ‘ok, you have your subject area. You can start the clock on your PhD. Have you ever seen a PhD?’, and I said ‘no’.

“A PhD was the next thing academically after a MSc and I took the opportunity. Even though I hadn’t seen a thesis, I was already mentally signed up and knew that this is what I wanted to do.”

Having committed to undertaking her biggest research project to date, Rachael’s determination and will to succeed came to the forefront as she brushed up on her academic writing.

She said: “Once I had completed and passed, Jayne told me that I’ve never known someone to work so hard on their writing as you have, I said ‘I have had lessons, I have read books, I went to the library for support, I did everything that I could because I had never done anything like that before.”

She started the PhD in April 2015 and finishing it in August 2021, becoming the first doctor in her family and completing a huge personal achievement.

She said: “I finished my PhD and thought it was time to use it. I had my arm twisted into doing a teaching qualification, it was there that I met somebody from a completely different field, he’s a lecturer in engineering and he talked about having done his PhD. He had completed three research posts and then he needed a more permanent job, so he took a lecturer role. I suppose that inspired me to think, if he can do it, then I can. I thought, I can manage three posts of not really knowing where my next paycheque was coming from.

“His story made me realise, if you take a risk, it doesn’t have to be a forever decision. I can go and consolidate my research skills and see where it takes me and not worry too much about the permanency or temporary roles.”

Rachael is now working in her post doctoral research role as Research Fellow for the ARC East Midlands-supported DACHA study, which aims to develop research resources and a minimum data set for care homes’ adoption and use. She is working under Professor Adam Gordon, the Theme Lead at ARC East Midlands for Building Community Resilience and Enabling Independence.

The role is perfectly suited to Rachael as she sets off with a target of persuading 20 care homes from 53 to take part and then getting 338 participants on board.

Rachael is thriving in research, with her experience and skills perfectly suited to her new career path. She says more healthcare professionals should consider research. Rachael said: “Research underpins good quality care. It provides the evidence we need for new innovations and for progressing practice. I’m proud of this country’s research community and to be doing my bit. I would urge anyone to consider research, it’s rewarding, stimulating and engaging.”

Your Path in Research

Visit the NIHR campaign page and find out how you can add research to your career: https://www.nihr.ac.uk/health-and-care-professionals/your-path-in-research/