A GP from Leicester who is recognised as the world’s leading diabetes researcher has been presented with the Commander of the Order of the British Empire (CBE). 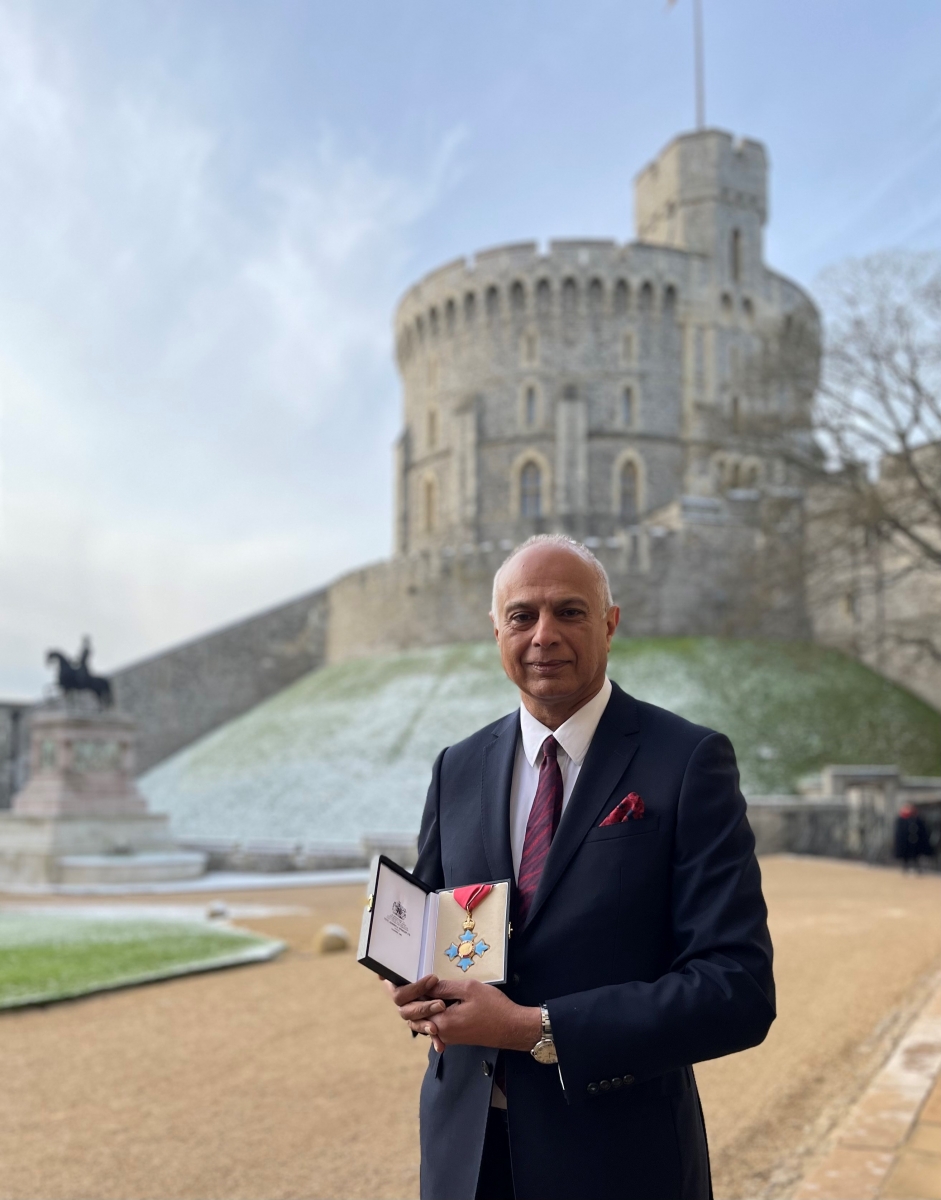 Professor Kamlesh Khunti was given the accolade by His Majesty The King at an investiture at Windsor Castle held on Wednesday, December 14, after being named in the New Year’s Honours List.

He has been responsible for major advances in type 2 diabetes and cardiovascular diseases and receives the award having published more than 1,000 academic papers – helping to build an evidence base to improve clinical practice.

Professor Khunti has also contributed significantly to improving the health of the Ethnic Minority community and has led a body of research throughout the pandemic, becoming a member of Scientific Advisory Group for Emergencies (SAGE), Chair of the SAGE Ethnic Sub-panel and being one of the very first to spot the disproportional impact of COVID-19 on people from ethnic minorities.

Professor Khunti, who still practices part time as a GP, rose from humble beginnings growing up in a crowded terrace house in inner city Leicester and was told he would not make it by his teacher – only to go on to reach the pinnacle of his chosen profession.

The LDC Co-Director started out as a General Practitioner in 1990 and recruited his first research assistant in 1998. With increasing success, the team grew and Professor Khunti took up an appointment with the University of Leicester as Professor of Primary Care Diabetes and Vascular Medicine in 2007.

Sustained growth over several years saw relocation to the Leicester General Hospital site, bringing together a number of colleagues into one large and increasingly successful unit.

Professor Khunti said: “I am truly humbled and I would like to dedicate the award to my team at the Leicester Diabetes Centre, the University of Leicester, my staff at the Hockley Farm Medical Practice and most of all to my family.”

When the award was announced on the last day of 2021, messages of congratulations poured in.

At the time, Professor Nishan Canagarajah, President and Vice-Chancellor at the University of Leicester said: “I am immensely proud of Kamlesh’s achievement and it is most highly deserved. His dedication to improving health outcomes for some of the most hard to reach communities is admirable and he has worked tirelessly in his career to achieve so much. Kamlesh truly embodies our spirit as Citizens of Change, and I am delighted that he has received this honour in our Centenary year.”

Speaking on December 31, Professor Azhar Farooqi OBE, Non-Executive Director for NHS Leicester, Leicestershire and Rutland (LLR) Integrated Care Board (ICB), added: “We are delighted and proud that Kamlesh has been awarded a CBE in the New Year’s honours list. This is extremely well deserved for Kamlesh’s outstanding contributions to medical research, in particular in the fight against the covid pandemic and in highlighting the importance of reducing health inequalities.”

Also commenting following the news, Richard Mitchell, Chief Executive at University Hospitals of Leicester NHS Trust, said: “I would like to congratulate Kamlesh on his well-deserved honour. His research and direct patient care has improved the lives of so many, in particular those in ethnic minority communities. Kamlesh is an incredible colleague and the impact of his work has made, and continues to make, a remarkable difference.”

Professor Khunti is currently top diabetes researcher globally on Expertscape, the world’s leading index of academic achievement and expertise in healthcare based on scientific publications.

He has been elected as a Fellow of the Academy of Medical Sciences. He is currently an advisor to the Department of Health, a Clinical Advisor for NICE, and a member of the Primary Care Study Group of the European Association for the Study of Diabetes (EASD).

In 2019, Professor Kamlesh Khunti was given the South Asian Health Foundation’s Lifetime Achievement Award in recognition for his outstanding contribution to South Asian health through cutting-edge research, which has influenced frontline diabetes care across the world.

Last month, Professor Khunti was presented with a Lifetime Achievement Award from the Primary Care Diabetes Society (PCDS) in celebration of his outstanding accomplishments within diabetes care during his career.

Professor Khunti was also the 2021 recipient of the Diabetes Philippines ADL Endowed Lecture Award, which acknowledges an academic who has gained international respect for their work in diabetes care.