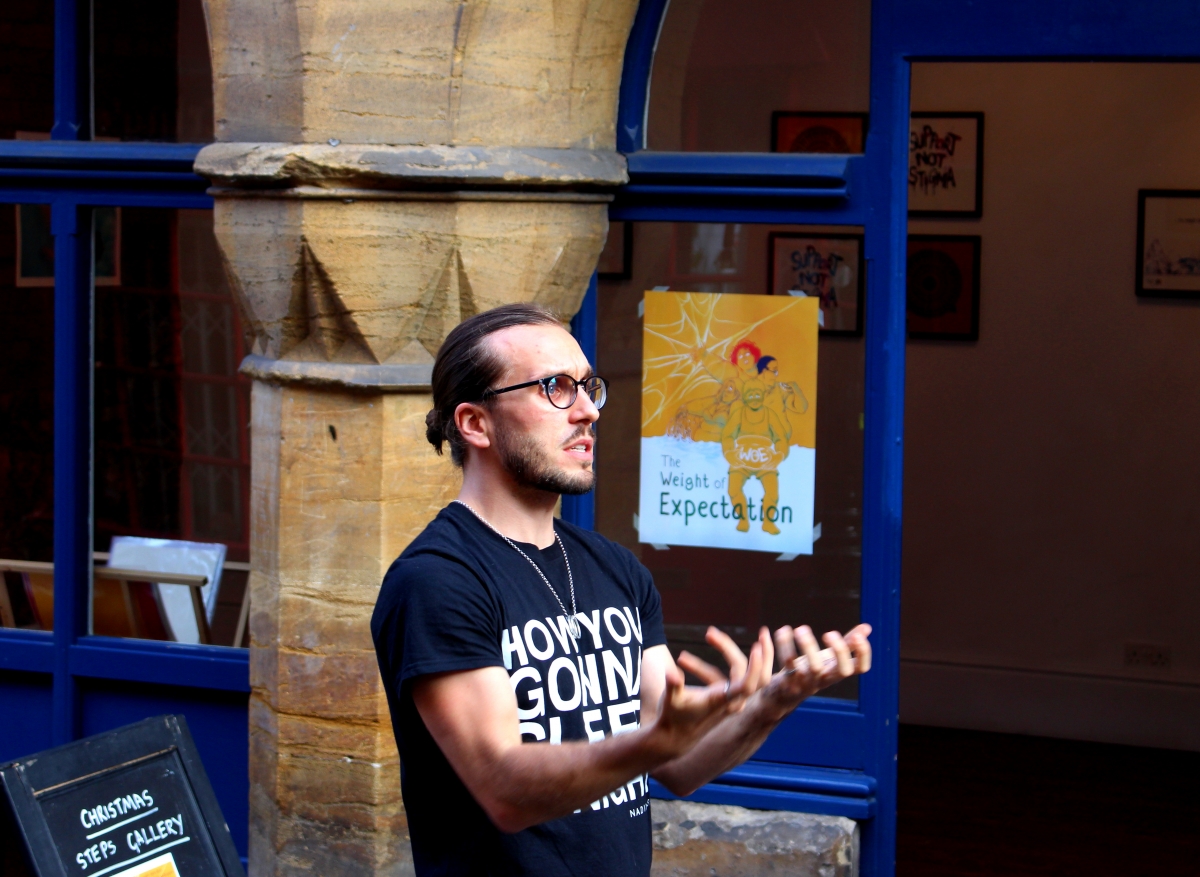 The focus on the drive to tackle obesity should be more about “health, not weight”, according to a leading sociologist from the East Midlands.

Dr Oli Williams, a researcher for the NIHR Collaboration for Leadership in Applied Health Research and Care (CLAHRC) East Midlands and a research associate at the University of Leicester, believes there should be an overhaul of current health campaigns, which he claims focus too heavily on weight loss and not enough on physical activity.

Dr Williams challenged some of the most fundamental assumptions about what it means to be overweight in the Margaret Mead Award Lecture for social sciences at the British Science Festival in Hull on Tuesday, September 11.

His innovative work on a comic, part-funded by NIHR CLAHRC East Midlands, which visualises his research into the stigma associated with bodyweight, was praised for its engaging communication skills.

The Weight of Expectation, illustrated by Jade Sarson, from Lincoln, is based on the experiences of people who attended NHS-subsidised weight-loss groups in one of the most deprived neighbourhoods in England.

Dr Williams said: “I would argue that at the moment the most common ways that people think about and act upon obesity are inaccurate and unhelpful. I think people are obsessed with weight loss and that’s a big part of the problem.

“We know that the BMI scale – which is what your GP uses to categorise you as obese or not – is a very crude health measure. We know that physical activity is a much better predictor of health. For instance, there is good evidence showing that people who are categorised as obese or overweight – but who are also physically active – can experience the same levels of physical health as active people who have a so-called ‘healthy’ BMI.

“The focus should be on health, not weight. We should be doing more to make the healthy choice the easy choice for all, by addressing the social factors that largely determine people’s health and behaviour.”

Obesity is rising in England with 58 per cent of women and 68 per cent of men classed as overweight or obese in 2015, according to official statistics from NHS Digital.

Government body Public Health England welcomed the tax on sugary drinks when it was announced in 2016 in the light of the risks of “obesity, tooth decay and other life-threatening diseases”.

However, Dr Williams believes taxes that generate money should be invested in reducing the social inequalities that he claims determine people’s health.

He added: “Most people know that eating well and doing exercise is good for them. The problem isn’t a lack of knowledge; it’s a lack of capacity to act on that knowledge. And that’s largely socially determined. If you’re at the lower end of the socio-economic scale, your capacity to choose healthy options is limited or compromised. But we don’t approach the problem socially. We individualise it.”

The Weight of Expectation lecture took place at Middleton Hall, University of Hull, on Tuesday 11 September, at 1pm.

For anyone who can put the comic to use in their practice – for example health service providers, lecturers, teachers – free education packs can be ordered by visiting: http://www.actwithlove.co.uk/woe.html.

NIHR CLAHRC East Midlands is a partnership of regional health services, universities and industry which turns research into cost-saving and high-quality care through cutting-edge innovation.